The Kallanai Dam was “[built] during the second century AD by Karikalan, a king of southern India's old Chola Dynasty” and “is also one of the oldest irrigation systems in the world that is still in use” (Agoramoorthy and Hsu, 2008). “The purpose of the dam was to divert the waters of the Kaveri across the fertile Thanjavur delta region for irrigation via canals. Since the English arrived in the eighteenth century, the Kallanai has been tampered with and other hydraulic structures have been added nearby. It is therefore difficult to extrapolate from the current situation into the past to understand the workings of the anicut” (Bijker, 2007). Figure 1 shows the current state of the dam. 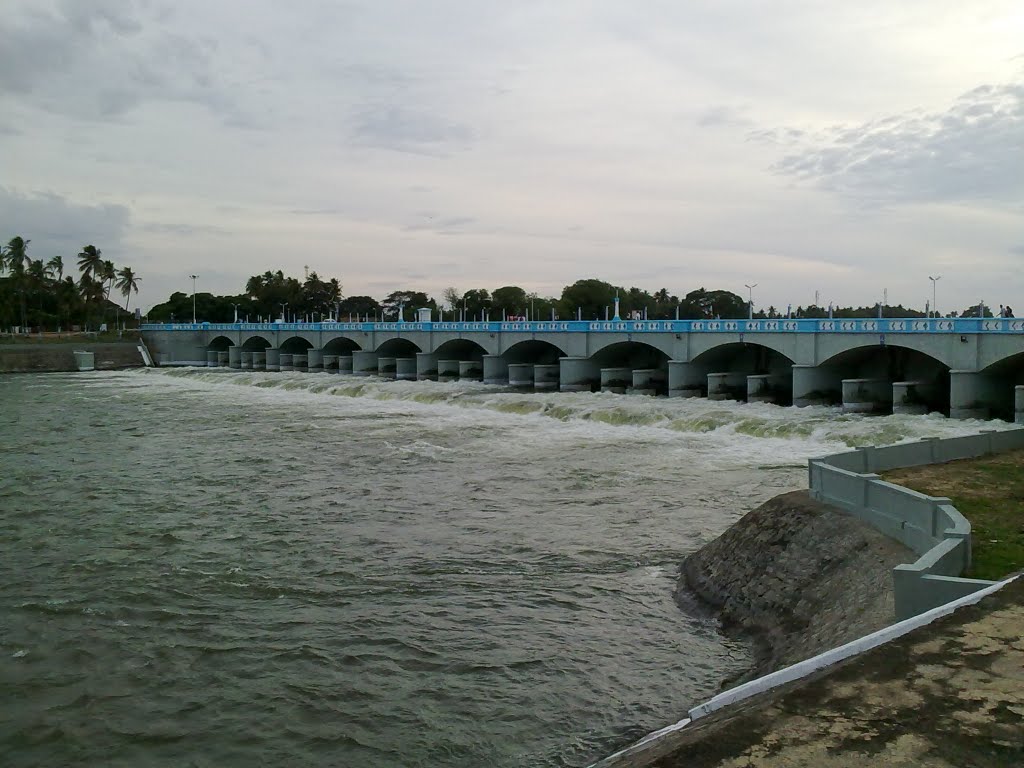 The author was not able to locate the duration of construction for the Kallanai Dam.

The Kallanai Dam is a simple check dam (Agoramoorthy and Hsu, 2008). Check dams are “small barriers using stones, cement, and concrete built across the direction of water flow on rivers to harvest rainwater in remote villages” and “are usually smaller than 15 m” (Agoramoorthy and Hsu, 2008). The Kallanai in particular “is an anicut of unhewn stone that stands in the Kaveri parallel to the riverbank; it is more than 300 meters long, 20 meters wide, and 4.5 meters high” (Bijker, 2007). It is believed that Kallanai initially irrigated about 69,000 acres, though it now irrigates close to 1 million acres (Arulmani). Because the Kallanai has been altered after the 1800s, it is difficult to understand more about its construction (Bijker, 2007). However, “[in] her pioneering study, [Dr. Chitra] Krishnan combined historical studies of old descriptions of the anicut from a variety of archives with archaeological and anthropological field surveys and original hydraulic research. This enabled her to piece together a picture of the Kallanai…” (Bijker, 2007). “Krishnan’s reconstruction suggests that the original Kallanai had some very peculiar design features: the curved shape of the masonry section, a sloping crest, and an irregular descent from front to rear” (Bijker, 2007), which is shown in Figure 2.

Figure 2: Plan and elevation of the Kallanai, as reconstructed by Krishnan from descriptions of around 1777. Courtesy of Chitra Krishnan, “Tank and Anicut Irrigation Systems: An Engineering Analysis” (Ph.D. diss., Indian Institute of Technology, 2003).

Figure 3: Reconstructed map of the Kaveri River around the Kallanai anicut, before 1800. Courtesy of Chitra Krishnan, “Tank and Anicut Irrigation Systems: An Engineering Analysis” (Ph.D. diss., Indian Institute of Technology, 2003).

In her analysis of anicut practices in India, Chitra Krishnan concluded “ that the old anicuts worked so well because they sophisticatedly reshaped water currents and sedimentation processes, rather than trying to control all natural elements by force” (Bijker, 2007).