The Battle of Alesia took place in September, 52 BC around the Gallic oppidum of Alesia, a major town centre and hill fort of the Mandubii tribe. It was fought by an army of the Roman Republic commanded by Julius Caesar against Gallic tribes united under the leadership of Vercingetorix of the Arverni. It was the last major engagement between Gauls and Romans and the end of organized resistance to the Roman Empire, marking the turning point of the Gallic Wars in favour of Rome (Wikipedia). Kind of a big deal.

To guarantee a perfect blockade, Caesar ordered the construction of an encircling set of fortifications, called a circumvallation, around Alesia. The details are known from Caesar's Commentaries. About 18 kilometres of 4 metre high fortifications were constructed in about three weeks (Wikipedia). This line was followed inwards by two four-and-a-half metre wide ditches, also four-and-a-half metres deep. The farthest from the fortification was filled with water from the surrounding rivers. These fortifications were supplemented with mantraps and deep holes in front of the ditches, and regularly spaced watch towers equipped with Roman artillery. Vercingetorix's cavalry often raided the construction works attempting to prevent full enclosure. Caesar ordered the construction of a second line of fortifications, the contravallation, facing outward and encircling his army between it and the first set of walls. The second line was identical to the first in design and extended for 21 kilometres (Wikipedia). 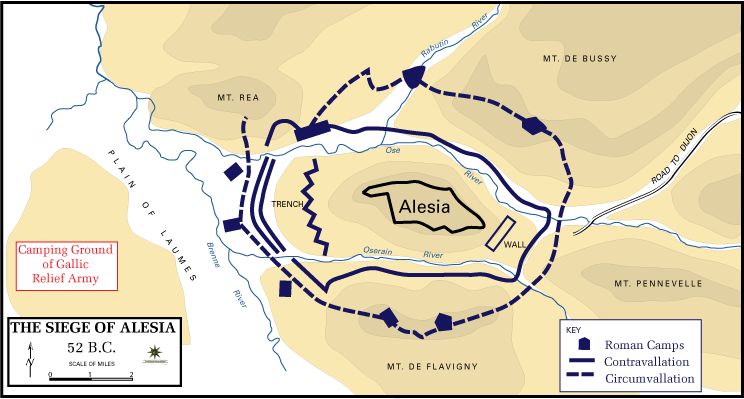 Attackers from the outside would need to pass through: a field of stimuli, wood blocks with iron hooks fixed in them; a field of lilies, sharpened stakes in pits; trenches of grave-stones, impenetrable artificial underwood; two trenches a palisade with towers. Wood for stakes was always burnt on the end to make it harder. Wood for the walls and towers was gathered from the woods, and cut by hammering a giant chisel into the wood, eventually stilling the log apart.

V-cross-section ditches more than a meter or so deep have long been recognized as especially defensive. Their surface width, depth, steep sides, and narrow bottoms make them difficult for attackers to negotiate. This was well recognized by the Romans, who called such ditches fossae fastigata (sloped or pointed ditches), and used them often to encircle their fortifications (Keeley et al. 2007).The large circumference of their sides relative to their volume means they are more prone to erosion than other ditch forms (i.e., semicircular and shallow trapezoidal) when filled with moving water (Keeley et al. 2007). Both of these reasons are why irrigation ditches, aqueducts, and moats have long been trapezoidal, square, or semicircular in cross section. When Julius Caesar’s army built siege fortifications (a contravallation) in A.D. 52 surrounding the Gallic hillfort of Alesia, the Romans dug two 2.4–2.7-m deep ditches in front of their curtain wall. The innermost (i.e., closest to Gallic Alesia), a water-filled moat, was trapezoidal in section, while the dry ditch just below the Roman palisade was V-sectioned (Keppie, 1989, pp. 181–183).