Iran is an arid country that has always faced severe problems with drought. Its main sources of water are annual precipitation, “which is less than one third of global average precipitation” and 72% of which cannot be used due to evaporation and transpiration, and groundwater (Alemohammad et al, 2010). Currently, and likely similarly in the past, 92.8 percent of Iran’s water is needed for agricultural use. Therefore, “ancient Iranians invented a new system to bring the groundwater to the surface using gravitational force”, called “qanat” (Alemohammad et al, 2010). “The qanat is a method for developing and supplying groundwater and consists of a gently sloping tunnel, cut through alluvial material [usually in large alluvial fans] , which leads water by gravity flow from beneath the water table at its upper end to a ground surface outlet and irrigation canal at its lower end” (Beaumont, 1971).

Because qanats are constructed by hand by skilled laborers, called muqannis, they can take over a decade to construct (Beaumont, 1971). The author could not find the duration of construction for the Moon Qanat.

The Qanat of Mun is a 2km long, two-story qanat, having two main tunnels with one mother well each (Alemohammad et al, 2010). The lowest tunnel is 30m down and is separated by the above tunnel by 3m of elevation (Alemohammad et al, 2010). This top tunnel “goes through a half circle path when it reaches the vertical shafts” ("The Ingenious Ancient Qanats of Iran"). The layer between the tunnels is impermeable, so water does not leak between them ("The Ingenious Ancient Qanats of Iran"). However, the tunnels do share all other wells besides their mother wells (Alemohammad et al, 2010). A rough sketch of this is shown in Figure 1. The entire Moon Qanat has 30 shafts ("The Ingenious Ancient Qanats of Iran") that are spaced 42.4m apart (De Feo et al, 2009). Its average outward flowrate is 50 liters per second (De Feo et al, 2009). 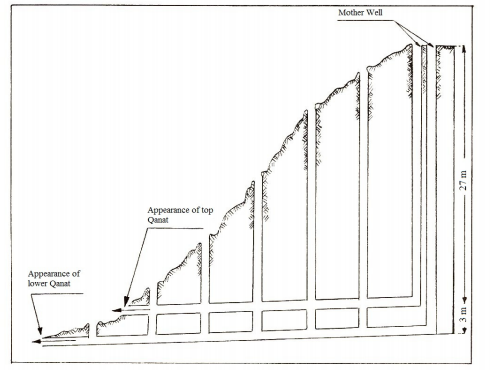 According to Alemohammad et al, there are several elements to a qanat:

“Appearance: The place where water comes into view on the surface (tunnel reaches the earth surface) is called the appearance.

Tunnel: The canal whose section resembles a horseshoe inside the ground enjoying a gentle slope for water conveyance from the aquifer to the appearance.

Wet zone: It is referred to the infiltrating walls inside the gallery of a Qanat. The discharge rate is directly dependent upon the wet zone. Indeed this is the part of the tunnel which goes below the groundwater table.

Dry zone: A Portion of the gallery between the wet zone and the appearance. This canal is gradually cut deeper due to the decline of the water table.

Shaft: The dry vertical wells situated across the gallery in order to facilitate soil extraction as well as ventilation and dredging. The distance between two shafts was based on the depth of the Qanat and the air passage. The nearer the shafts were to the mother well, the deeper they were.

Figure 2: The structure of a qanat 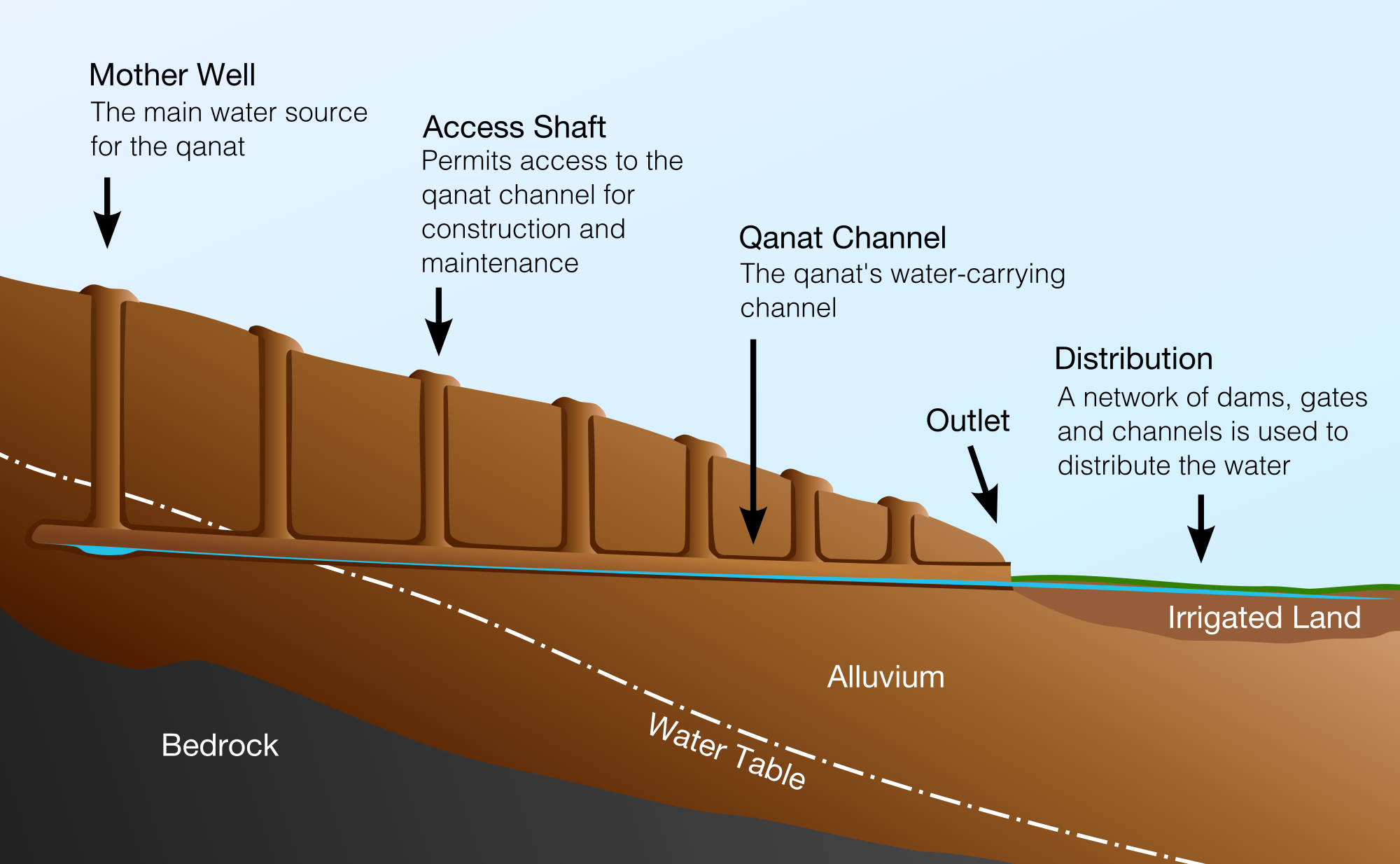 Before construction of the qanat begins, an appropriate site for the Mother Well (probably near the mountainous areas)” must be identified and dug just below the water table (Alemohammad et al, 2010). Afterwards, a path towards where one wants the water to appear is marked on the ground (Alemohammad et al, 2010). Then the skilled laborers begin work on the tunnel. “The cross-section of the tunnel is usually elliptical with a height of c. 1.2 metres and width of c. 0.8 metres. Wherever possible the tunnels are unlined, but in areas of weakly consolidated material baked clay rings known as Kavulls are used to avoid roof and wall collapse. The vertical shafts are approximately 0.7 to 1.0 metres in diameter and are usually strengthened in their upper portions by mud linings or mud brickwork” (Beaumont, 1971). “In order to be able to work underground (having enough oxygen, sending out the unnecessary soils and going out and coming back to the tunnel) some vertical shafts will be dug over the path” (Alemohammad et al, 2010).

“Some of the Iranian Qanats date back 3000 years ago” and are still in use today (Alemohammad et al, 2010). This is probably mainly because, other than work done by gravity, no other energy is required to power water flow in a qanat, making them very cost effective to run ("Beaumont, 1971). A side effect of this is that qanats have become a major cultural contribution of the Iranians, who spread this technology to countries such as “Oman, Egypt, Spain, Germany, Mexico, America, Japan, Chile and North Africa” (Alemohammad et al, 2010). However, qanats are extremely expensive to make, and can take over a decade to finish. “Even using cheap labour at the present day, qanats cost approximately 10,000 dollars per kilometre to build as compared with 3~15,000 dollars for sinking a well”, which is why wells are rapidly replacing qanats (Beaumont, 1971).