How about space-based solar panels?

Solar power is nowadays a popular and well-established renewable energy source, however has a severe limitation: it only works when the sun is shining. Scientists have tried to overcome this, by creating higher-performance systems that can generate energy even during cloudy days or during the night. But although these systems will work under these more challenging conditions, efficiency will drop, naturally. Another issue that cuts back the efficiency of solar energy is that the atmosphere itself absorbs some of the energy emitted by the sun, while some of the incoming radiation is reflected back into space by the clouds, atmospheric particles or bright surfaces on the ground. The solution to all these could be the installation of panels in space where there are no such limitations.

The concept of space-based solar power (SBSP) started as science fiction, but began to seem possible in 1973. It was when Peter Glaser managed to transmit power over long distances (from a solar power satellite (SPS) to the Earth's surface) using microwaves from a very large antenna (up to one square kilometer) on the satellite to a much larger one, now known as a rectenna, on the ground. After his discovery and in response to the periodical energy crises, the idea has been followed up again by the U.S. Department of Energy, NASA, and also major aerospace companies and countries such as Japan and India. In 2011, the International Academy of Astronautics (IAA) claimed that â€˜there are no fundamental technical barriers that would prevent the realization of large-scale SPS platforms during the coming decadesâ€™. The major impediment though, has been the economics of such a venture, due to the fact that it would be a challenge to provide SBSP at a competitive price.

How the technology works

Mirrors in orbit would reflect sunlight onto huge solar panels, which will capture solar energy converting it to direct current. The electricity would then be converted into microwaves, which would get beamed down to some receivers on Earth, where it would get converted back to electricity. And although there are lots of conversions, the system is expected to be efficient enough. There are six different disciplines that scientists have to work through though: wireless power transmission, space transportation, construction of large structures in orbit, satellite attitude and orbit control, power generation, and power management, out of which wireless power transmission remains the most challenging.

Two years ago, Paul Jaffe, spacecraft engineer at the U.S. Naval Research Laboratory, presented his plan for implementing space-based solar at the Department of Defenseâ€™s first-ever Diplomacy, Development, and Defense (D3) Innovation Summit Pitch Challenge. His plan concerned a demo orbital power station capable of powering more than 150,000 homes in orbit within 10 years for $10 billion, an investment that would pay off in the long run, and was awarded 4 out of 7 awards, within 500 submissions.

Both Japan and China have plans for launching their own space solar stations in the next 25 to 30 years, with Japan Aerospace Exploration Agency (JAXA) having a technology road map that suggests a series of ground and orbital demonstrations leading to the development in the 2030s of a 1-gigawatt commercial systemâ€”about the same output as a typical nuclear power plant. In the US, the California-based company Solaren Corp. is working on the design, development and eventually operation of space solar power plants, aiming to sell baseload electricity to utility and government customers at a competitive price. 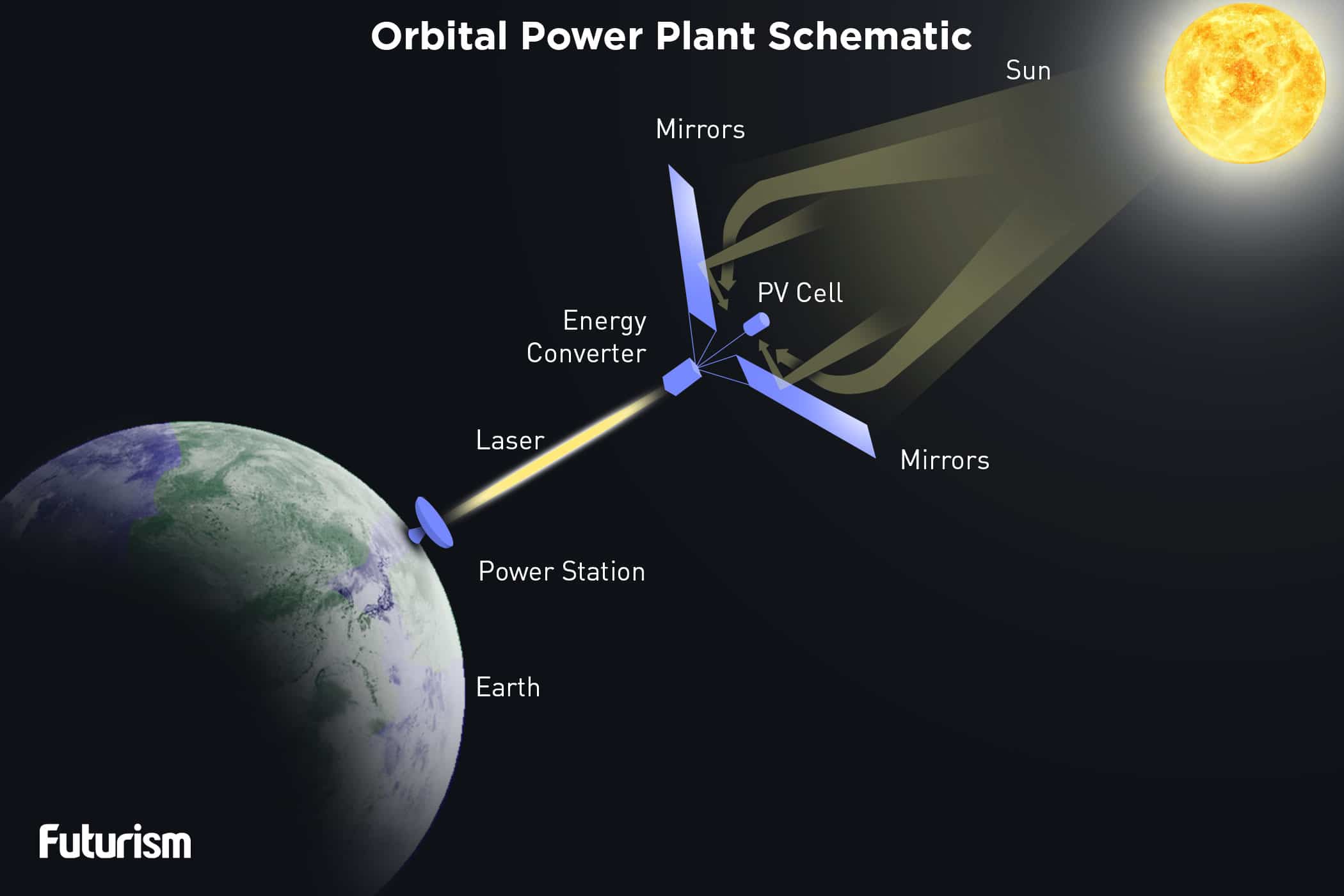