A map that records urban air pollution with great spatial precision, showing that air quality may profoundly vary within neighborhoods or even city blocks, was developed by engineering researchers and Google. They created the largest urban air quality data set of its type thanks to two Google Street View vehicles, equipped with pollution sensors, that drove more than 14,000 miles in Oakland, CA, taking samples and 3 million measurements in a 30-km2 area for about 150 days over the course of a year. In comparison to stationary air quality monitors, this new mobile methodology allows researchers to collect much more data, and more importantly at street level, where people are actually breathing the air. The results of their work are published in the ACS journal Environmental Science & Technology, while they hope that this readily scalable measurement approach could address major air quality data gaps worldwide.

The team consists of researchers from The University of Texas at Austin and colleagues from the University of Washington, University of British Columbia, Utrecht University and Lawrence Berkeley National Laboratory. The study was realized in partnership with Google and Aclima, a San Francisco-based company that delivers environmental intelligence through sensor networks and was funded by the Environmental Defense Fund (EDF).

The studyâ€™s approach was designed to be cost-effective and easy to replicate. Fast-response Aclima measurement and a data acquisition platform were used, recording nitric oxide, nitrogen dioxide and black carbon pollutants every 100 feet in the city. The Aclima Ei platform provides data management, quality control, and visualization functions, facilitating extensive, routine measurements. The study used fast-response (1 Hz) laboratory-grade analyzers: a photo-acoustic extinctiometer for BC; chemiluminescence for NO; and cavity-attenuation phase-shift spectroscopy for NO2. The inlet system was designed to minimize self-sampling and particle sampling losses. The researchers developed a set of data reduction algorithms to convert the collected data into estimates of median annual weekday concentrations for individual 30-m road segments. 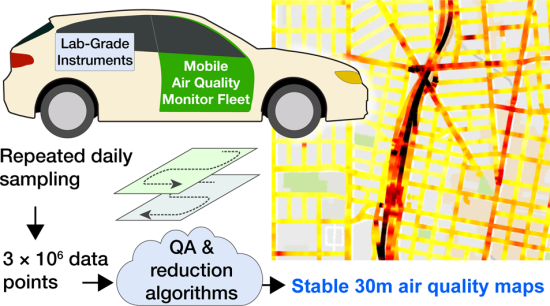 The pollution maps are accessible on the EDF website.

Nitric oxide, nitrogen dioxide and black carbon pollutants are associated with health problems, and the results showed that in some cases, the concentrations measured by Googleâ€™s cars were several times higher than what showed in Oaklandâ€™s official monitors. According to the researchers, there are hotspots in the city â€“such as the port, busy intersections, warehouses, industrial plants- where pollution on a single block was consistently much higher than elsewhere in a neighborhood. â€˜What surprised us is that there are consistently locations that can be as much as six times more polluted on one end of the block than on the other. Among other things, this demonstrates that people are getting disproportionate exposures of unhealthy air at some locationsâ€™, says Kyle Messier, a UT Austin postdoc and a co-author. â€˜You could use this information when youâ€™re picking a school for your kids. Is there a school with a playground that might have better air quality because your kid has asthma?â€™ This hyper-local information about consistent air quality can be really useful for people, especially those who are vulnerable because of age or health condition, saysJoshua S. Apte, assistant professor at the University of Texas at Austin and leading coauthor.

This project is the latest phase of a partnership between EDF and Google, who have been working together since 2012 to map and measure a growing list of health and environmental risks, including methane leaks.