Power plants’ CO2 emissions are turned into stone in Iceland

Carbon capture and storing (CCS) seems to be a solution towards halting global warming, however existing projects store the CO2 as a gas in sedimentary rocks such as exhausted oil fields, with concerns about potential leakage and monitoring costs. This method also requires the CO2 to be separated from the mix of gases emitted by power stations and industrial plants, which is expensive. A cheaper and more secure way of burying CO2 is being under research in Iceland, where CO2 was pumped into the volcanic rock and turned rapidly into limestone, as the basalts reacted with the gas to form carbonate minerals. The pilot project, which is called Carbfix and started in 2012, could be an excellent permanent storage for CO2 coming from burning of fossil fuels.

Iceland’s Hellisheidi power plant, the world's largest geothermal facility, provides energy for the country’s capital, Reykjavik, by pumping up volcanically heated water to run electricity-generating turbines. However, the process also brings up volcanic gases, including H2S and around 40,000 tons of CO2 per year (5% the emissions of an equivalent coal-fired plant, but still considerable). During the 2012-2013 period, a team of researchers piped 250 tons of CO2 mixed with water and H2S down into the basalt to a depth of 400-800m, monitoring the formation's chemistry through a series of wells. In nature, when basalt is exposed to carbon dioxide and water, a series of natural chemical reactions takes place, and the carbon precipitates out into a whitish, chalky mineral. Although this operation should last for hundreds of thousands of years, it seemed that over 95% of the gas was turned into a solid in just 2 years! Their work was published in the journal Science last June. “We need to deal with rising carbon emissions and this is the ultimate permanent storage – turn them back to stone,” said research leader Juerg Matter at the University of Southampton in the UK. Because of the project’s initial success, in 2014 Reyjavik Energy started injecting carbon dioxide at the rate of 5,000 tons per year, and plans to double the injection rate to 10,000 tons.

The main stumbling block is the large amounts of water required for this technique: 25 tons for each ton of CO2 buried. But Matter said seawater could be used, which would be in plentiful supply at coastal sites. Another issue is that subterranean microbes might break down carbonate to methane, a powerful greenhouse gas, but this was not observed in the Iceland research. Moreover, the success of the project is based on local basalt, which contains large amounts of calcium, iron and magnesium which are needed to precipitate out carbon and which might be in short supply in other soils. However, all the world's seafloors are basically made of the porous, blackish rock, as are about 10% of continental rocks. "This means that we can pump down large amounts of CO2 and store it in a very safe way over a very short period of time," said study coauthor Martin Stute, a hydrologist at Columbia University's Lamont-Doherty Earth Observatory. "In the future, we could think of using this for power plants in places where there's a lot of basalt—and there are many such places."

CCS seems to have a lot of potential, and it is estimated that the cost of the big emissions cuts required would more than double without it. However, CCS globally has not developed as quickly as hoped, even though injections are being made for almost half a century now (from companies wishing to drive more oil and gas from older fields).

Iceland's Hellisheidi geothermal power plant is the world's largest. It is cleaner than those run on fossil fuels, but still emits carbon dioxide by venting volcanic gases. 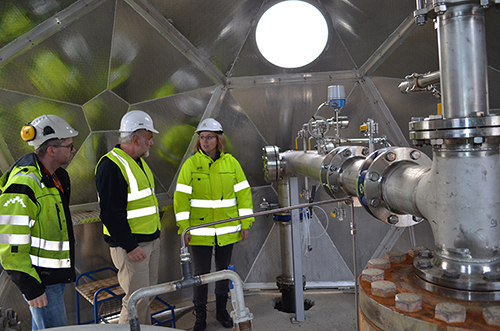 Part of the piping system that pumps emissions back underground. 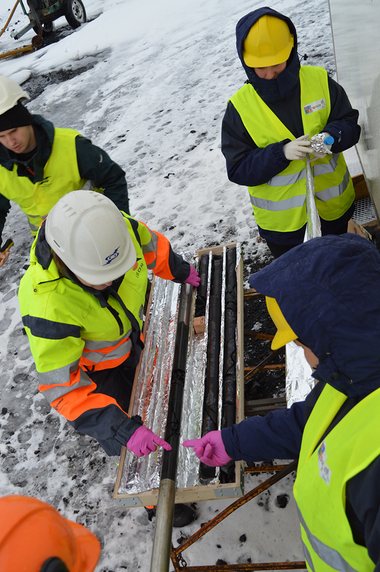 Fibre optic technology is introduced in a novel s...