Since Monday, January 16, a new sticker system is in force in the French capital, as a measure to deal with high air pollution levels. The stickers range from ‘green’ for electric or hydrogen vehicles to a ‘level 5’ for the most polluting ones, whose circulation will not be allowed on Paris roads. Depending on daily pollution levels, only cars with appropriately colored stickers will be allowed in ‘zones à circulation restreinte’ (ZCR - low-emission zones) on weekdays between 8am and 8pm, meaning that the higher the pollution the more vehicles will be banned. Vehicles without the stickers will not be allowed to enter the city center and this also applies to foreign vehicles passing through the French capital. Violators of the ZCR restrictions will have to pay a fine ranging from €68-135 depending on the car’s category. Authorities also promote public transport via fare discounts and the so-called "pollution ticket", costing just €3.60 for a whole day of travel, in order to tackle down the issue.

The types of stickers

There are 6 types of stickers, based on a vehicle’s energy efficiency, emission quantity and year of registration:

Diesel cars registered before 1997 are too old to qualify and are subject to a total ban between 8am-8pm Monday-Friday. 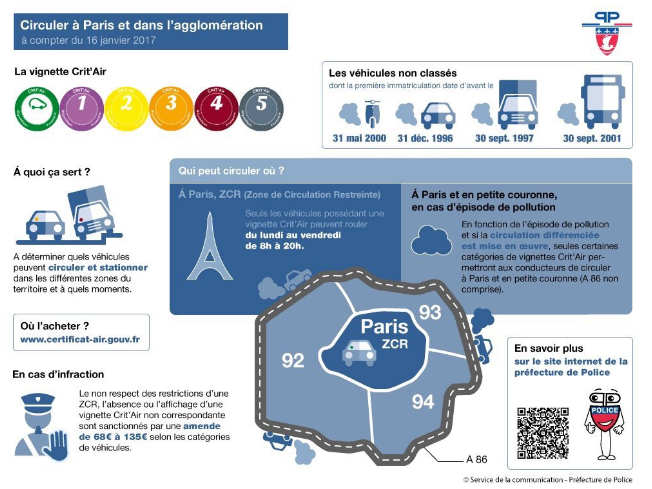