The relatively shallow waters and the optimal wind conditions at Dogger Bank in the North Sea, 100 km off the east coast of UK, make it an ideal site for offshore wind farms. Several such projects have been built in the area, including the worldâ€™s largest floating wind farm. Now, German and Dutch arms of electricity firm TenneT and Danish state-owned energy operator Energinet intend to build an artificial island in the middle of the North Sea. Its purpose? To serve as a cost-saving base of operations for about 10,000 wind turbines, while also doubling as a central hub for delivery of wind power and trading between border countries. â€œWe havenâ€™t let our fantasy gain the upper hand, although it may sound a little crazy and like something out of science fiction,â€ said Torben Glar Nielsen, the technical head of national energy provider Energinet.dk. â€œWe who have the responsibility of transporting the electricity generated by offshore wind turbines back to land and the consumers must constantly push and make sure that the price continues to fall. That requires innovative big-scale solutions, and an energy hub in the North Sea is worth thoroughly looking intoâ€, he adds.

Dogger Island will be covering an area of 6.5 km2, while offshore wind turbines will be installed all around it, supplying power to more than 80 million people. More islands may be built too, creating the so-called North Sea Wind Power Hub that could possibly reach 100,000MW in capacity. The islandâ€™s construction would cost just over Â£1.1 billion ($1.3 billion) and according to Energinet, it would be completed by 2050. Britain, the Netherlands, Denmark, Germany, Norway and Belgium will benefit from the project, as these six countries will be connected with the island through underwater cables.

â€œDonâ€™t be mistaken, this is really a very large, very ambitious projectâ€”thereâ€™s nothing like it anywhere in the world. Weâ€™re taking offshore wind to the next level,â€ said Jeroen Brouwers, spokesperson for the organization that first proposed the plan, Dutch-German transmission system operator (TSO) TenneT. â€œAs we see it, each island could facilitate approximately 30 gigawatts (GW) of offshore wind energy; but the concept is modular, so we could establish multiple interconnected islands, potentially supporting up to 70 to 100GW.â€

The agreement between the three TSOs was signed last March, and there are ongoing discussions with other potential partners, including other North Sea TSOs and infrastructure companies in order to achieve a multi-party consortium for the projectâ€™s realization.

The benefits of the project:

1. Thanks to the ideal wind conditions at Dogger Bank, the wind turbines will produce more energy and for a longer period of time. And due to the areaâ€™s shallowness, it would also be easier to erect the turbines.

2. Nearby (existing and future) floating wind turbine parks can be linked to the island, thus turning offshore parks into â€˜coastal parksâ€™. This will reduce the cost of transferring the generated energy and the need to use long cables.

3. The underwater cables that will be used to transport the electricity from the island to the North Sea nations can function as landfall cables and as energy highways for trade between nations. Landfall cables are today only used about half of the time because itâ€™s not always windy. By making them tools of the trade, they can be used more regularly.

4. Lower costs associated with operations and upkeep. Reserve parts for converter stations, wind turbines and electrical components can be stored on the island, while materials and manpower will be transported faster on open seas. 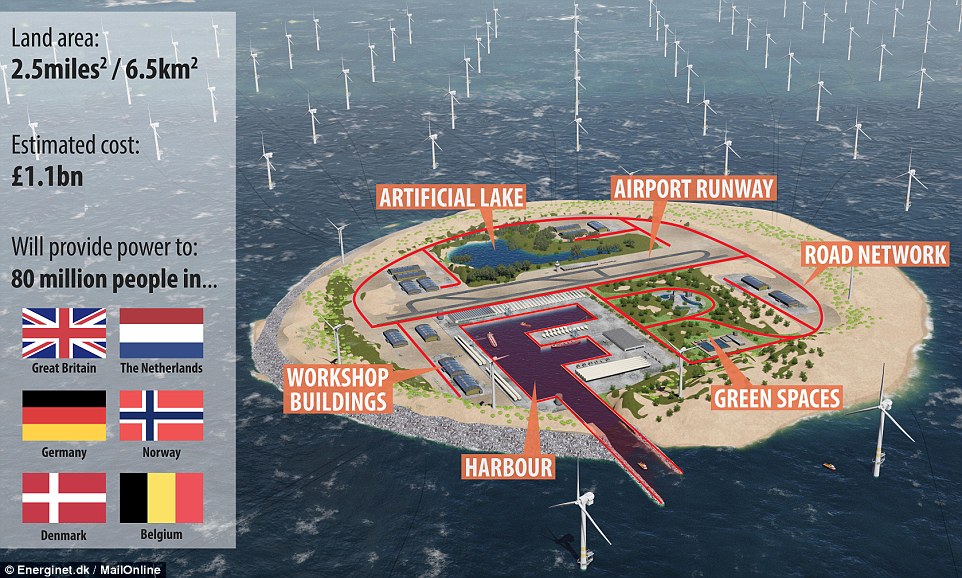 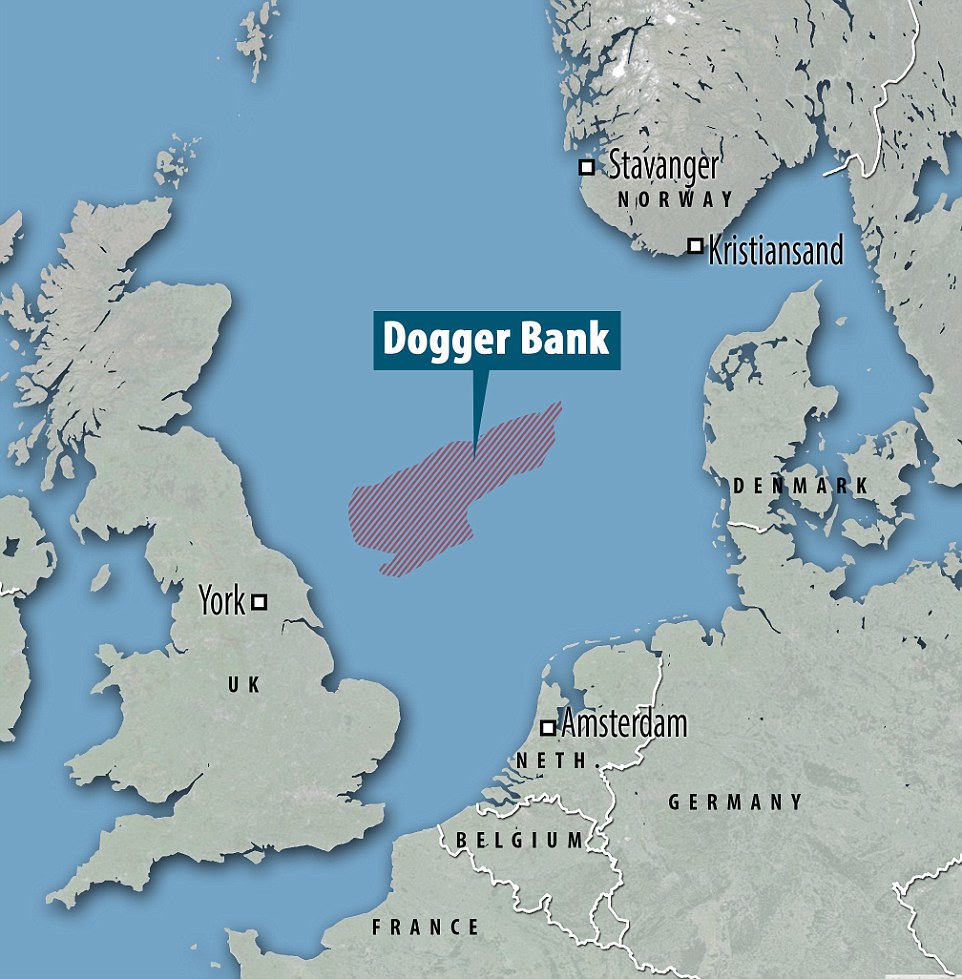 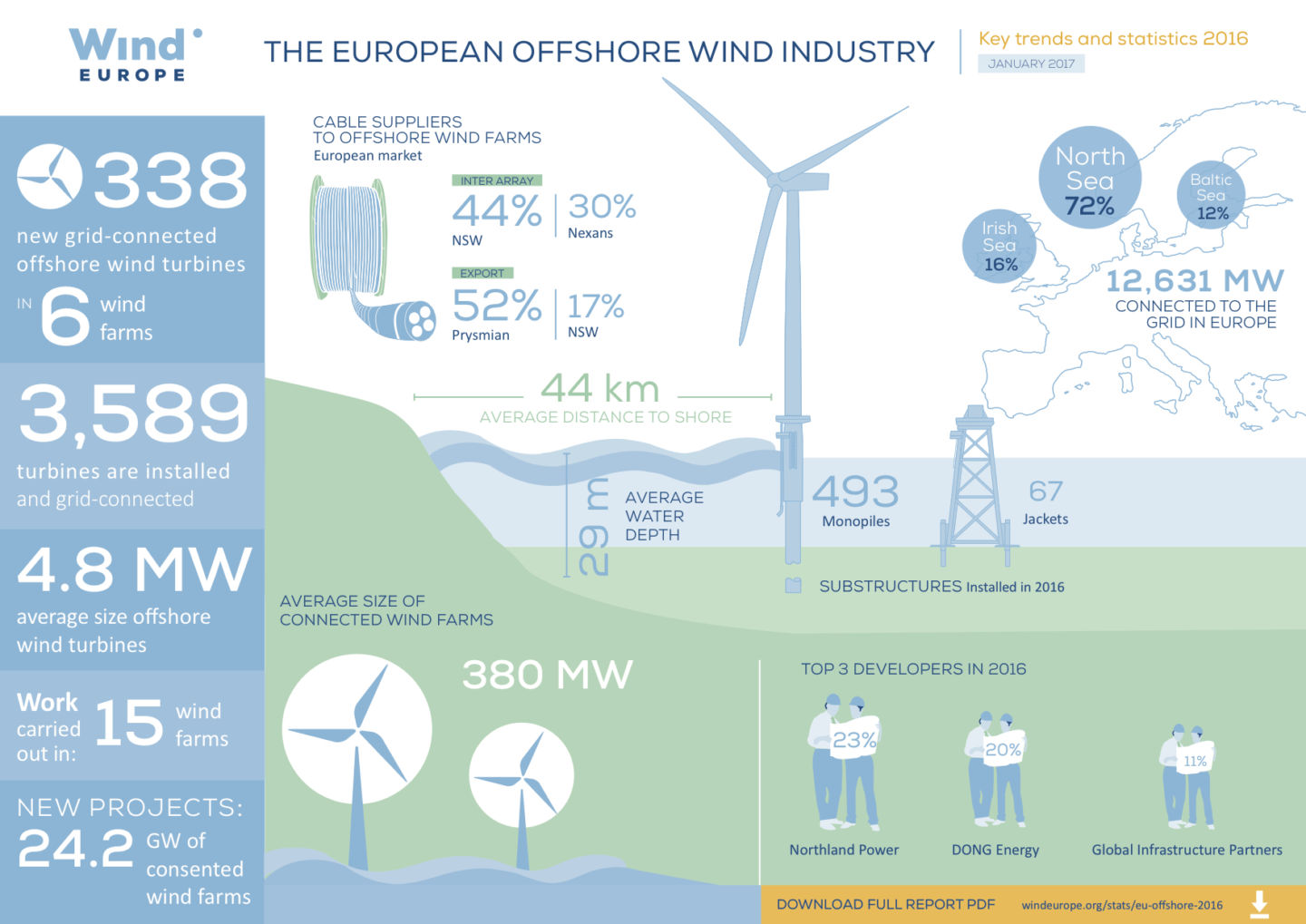 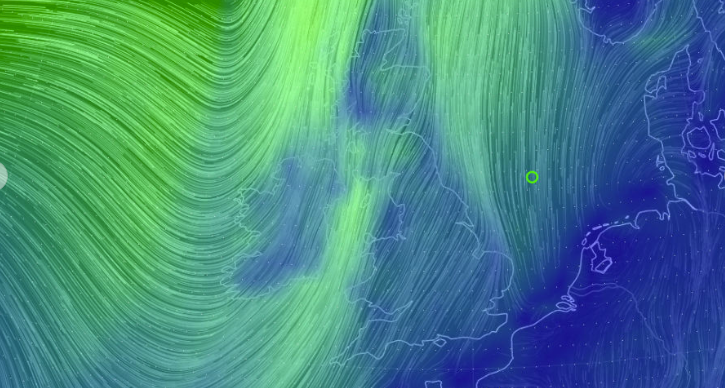 A map of some North Sea winds, with Dogger Bank highlighted.