People not fully conversant with autonomous drive technology yet Written by  TheCivilEngineer.org
Published in News on Research / Academia The study was conducted in the U.S. and showed that despite most people would rather use a ride-hailing service (e.g. Uber) they wouldn't select an autonomous vehicle over driving a car.

Researchers from the University of Washington conducted a survey asking 502 people whether they prefer driving a car or using a ride-hailing service for a 24-kilometer trip. For half of the group, the ride-hailing service was an autonomous vehicle. The main parameters involved in the selection was the travel time, the cost of the trip, the amount of waiting time and the activity. 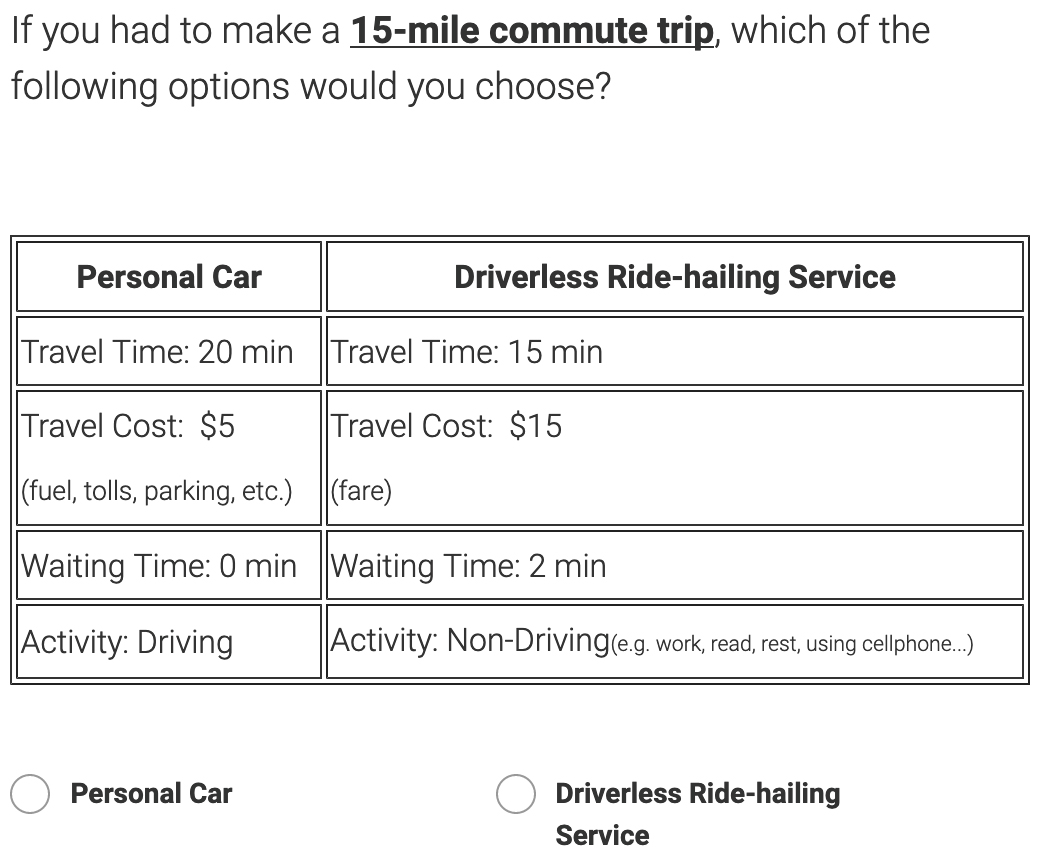 As shown in the figure above, the research team incorporated 2 parameters in their analysis, time and money. In particular, the time parameter was converted into a certain amount of money to derive the total cost of each transportation method. Therefore, the ranking of its driving choice is interpreted in terms of money. “The idea here is that time is money, so the overall cost of driving includes both the direct financial costs and the monetary equivalent of time spent traveling,” Don MacKenzie, co-author of the study and Associate Professor of Civil and Environmental Engineering at the University of Washington, stated.

The consequences of the study are crucial. In general, it was assumed that a ride-hailing service would be used equally whether there is a human driver or not. However, there is a psychological factor that affects people's choice and this should be considered in any future plans concerning autonomous systems. According to Prof. MacKenzie, people are not yet familiar with these vehicles as they are not commercial yet. “We believe that our respondents are telling us that if they were riding in an automated vehicle today, they would be sufficiently stressed out by the experience that it would be worse than driving themselves,” Prof. MacKenzie stated.

More in this category: « The surprising effect of greenhouse gas in lakes How climate change is affecting the safety of bridges »
Read 106 times Last modified on Friday, 27 September 2019 16:55
Tagged under